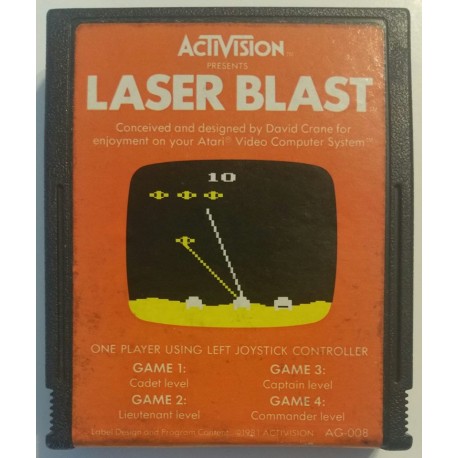 Activision, the company that gave you such popular shooters as Spider Fighter and River Raid, presents Laser Blast for the Atari 2600.

You control a spaceship that resembles a flying saucer. It is equipped with a laser blaster, which is used to fire downward at enemy bases (which are about the same size as your saucer) that crawl back and forth along the ground in groups of three. You can aim the blaster straight down or diagonally to the left and right.

There are never more than three enemies on screen at once, and they each look alike. Naturally, they will shoot lasers at you while you fly around. Be careful not to stay in one place too long, because the enemies are equipped with radar detection systems and will aim their lasers directly at your ship. When you destroy all three ground attack forces (enemy bases), the game scrolls to the right, effectively positioning your ship above the next three bases.

The spaceship you pilot can move up and down and to the left and right. As you progress through the game, however, the enemy projects a force field that will eventually restrict your movement to the very top of the screen. When up this high, it is very difficult to avoid radar detection. When you are low to the ground, you can keep your ship under the radar.

When you get shot in this game, you can take out an enemy by crash-landing your descending ship on one of the bases. For every 1,000 points you gain, you get an extra ship (up to six at one time). The goals of this game are to shoot enemy bases, avoid being shot, and score as many points as you possibly can.