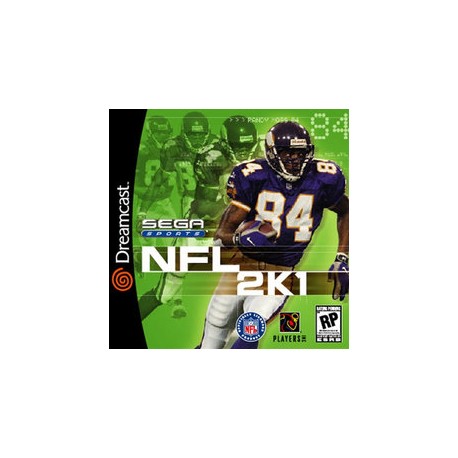 While Visual Concepts' NFL 2K was hailed as the second coming of next-generation football titles, many gamers voiced their opinions on gameplay quirks and problems ranging from running plays to controls. Apparently, the developers listened.

Arriving on the Dreamcast almost a year after its initial release, NFL 2K1 incorporates enhanced controls and gameplay with full National Football League licensing and online support. In addition to standard offensive passing and running plays, football fanatics can utilize juke maneuvers for zipping past defensive lines and speedy power moves. The entire running system has been overhauled with improved ball handling and accuracy. Additionally, bump and run coverage has been added for defensive measures and each team features its own distinctive playbook.

NFL 2K1 supplies standard console football options including Exhibition, Season, Playoffs and Super Bowl modes with a newly added Franchise mode. Building a football dynasty from the ground up, the Franchise mode will have you signing free agents and managing player salaries; basically, you're thrown into a general manager position. When players aren't performing as they should, you can either bench them for a second string rookie or trade them to a rival team. Additionally, football junkies will have the option of downloading current NFL rosters with updated statistics and injuries.

Channeled through SegaNet's server, online gameplay supports eight simultaneous players with four per team -- a first for the console market. As a combined effort, players from around the world can now communicate and cooperatively call and execute various offensive and defensive plays. Additionally, you can engage in conversing chat rooms, trade your customized rosters, and silence loudmouthed braggarts claiming ultimate football supremacy.

Visual Concepts has enhanced the graphic engine with 2,000 motion-captured animations thanks in part to wide receiver Randy Moss; he was also consulted on offensive playcalling. Like its predecessor, NFL 2K1 features 60 frames per second animations for lifelike movement. Individual player graphics have also been given a once-over with more detailed jerseys and higher polygon counts. Additionally, the weather effects have returned with snowy, rainy (which turns natural grass to mud) and foggy conditions. When the weather is nippy, you'll see mist spewing from players' helmets.

NFL 2K1 makes full use of the Visual Memory Unit by saving statistics, season data, and even downloaded rosters; instead of saving all game data, you can select what you want saved to conserve memory card space. It also features play-by-play commentary with colorful comments thrown in for extra measure.