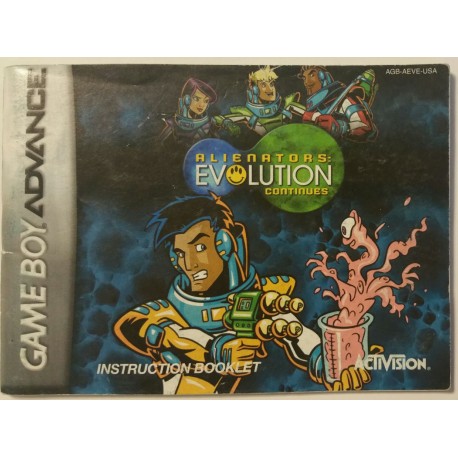 Alienators: Evolution Continues borrows its premise from the cartoon series of the same name, which in turn is based upon the 2001 live-action feature, Evolution. Utilizing a design that harkens back to the 16-bit era, Alienators: Evolution Continues is a 2D side-scrolling platformer similar to those common in the early-'90s. As Ira Kane, players must fight and jump their way through 12 stages set in locales recognizable from the cartoon series. The title's plot is told through the use of hand-drawn stills and explains how Scopes, a madman who unleashed the Genus (a form of alien DNA) upon himself, is now attempting to unleash it upon the planet. Naturally, it falls to Ira to put a stop to this and, equipped with an arsenal of blue-goop spewing gadgetry, he sets out to do exactly that.

While initially capable of little more than basic projectile blasts, by acquiring the right power-ups, The Devolver Ira carries becomes able to unleash a number of different attacks including rapid-fire, scatter-fire, high-impact, and a "glob shot." Players will also come across grenades that will instantly kill anything they come into contact with. The mutant monstrosities players encounter are essentially various animals that, as a result of having been exposed to the Genus, have been spliced together. There are eight in all, including such notable beasts as the Sharkadillo, Hydrasaurus, and Chamelakeet. When not fighting the swarms of mutant enemies, players will need to seek out differently colored key-cards in order to progress. During his quest, Ira will also meet friendly faces from the show such as Lucy Mai, Harry Block, and Wayne Green. Players can use passwords to record their progress in the adventure.