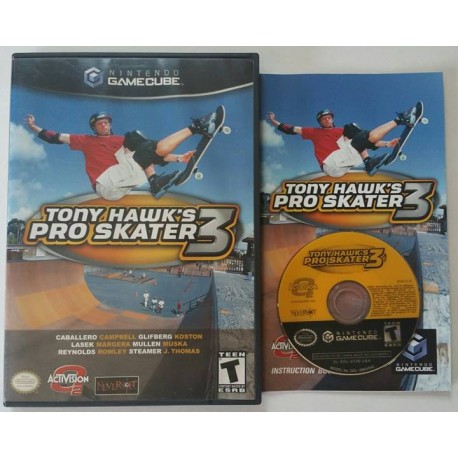 Skating fans and gamers of all sorts will spin, flip, grind, and sky their way to glory with more control and realism than ever before in this third full version of the explosively popular series of Tony Hawk skateboarding games. The Tony Hawk Pro Skater games established developer Neversoft as a universally respected big-name player in the industry and alone accounted for nearly 25 percent of Activision's total revenues in 2000. Many credit the franchise with legitimizing the extreme sports genre and this third edition once again infuses the title with outrageous tricks, engaging environments, and the distinct styles and personalities of some of the world's most talented and successful professional skaters.

As Tony Hawk Pro Skater 2 enhanced the play of the original game with larger environments and the possibility for more tricks and combos, Tony Hawk Pro Skater 3 expands upon the standards established by its immediate predecessor. This third edition features levels that are up to twice as big as those featured in THPS2. Levels are more dynamic and interactive in this version, featuring streets busy with traffic, sidewalks full of pedestrians, and several special mission-specific events. Each professional skater is imbued with stylistic distinction and signature moves. More options are included for developing custom characters in this version as well, including the ability to create female boarders with a wide range of clothing and appearance choices.

By including up to five times the amount of animation that was used in THPS2, Tony Hawk Pro Skater 3 is designed to make it easier for the player to read the status of his or her onscreen persona (and pull up when the skater is about to lose balance and bail!). The addition of new landing tricks is intended to allow the gamer to string together bigger combinations, even when moving from vert to street style skating.