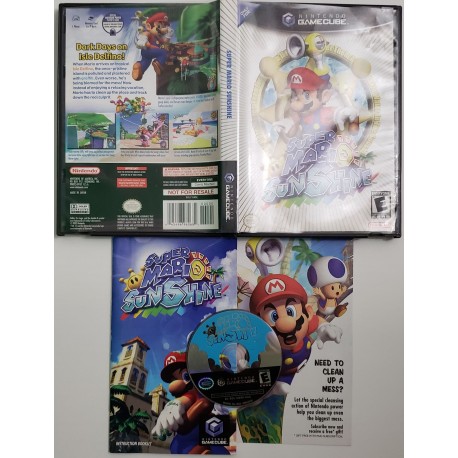 Nintendo's flagship character returns for more platform action in his first starring role in a 3D game since 1996's genre defining Super Mario 64. Upon his arrival to Isle Delfino for some well-deserved rest and relaxation, Mario finds himself under scrutiny from the local inhabitants. Apparently someone dressed like Mario has been polluting the island with an ooze-like substance, so the town sentences the Italian plumber to clean the mess up. Mario must not only clear the town but also clear his sullied reputation by finding the mischievous fellow responsible for the deed.

To combat this new environmental threat, Mario comes equipped with a water cannon mounted on his back. A meter in the bottom right corner of the screen depicts the amount of water left in his backpack as he sprays the ooze to wash it away. By removing the graffiti and grime from the town, Mario will reveal additional areas to explore. Each new region is accessed from a portal within Delfino Town in a manner similar to the paintings in Super Mario 64's castle. To activate a portal, Mario must collect a certain number of shines, golden suns that function like the stars in Super Mario 64. Shines are earned by solving puzzles, defeating boss characters, or by simply finding them within a level.

As in previous adventures, Mario can collect 100 yellow coins in each level and will encounter familiar creatures such as Piranha Plants and Bullet Bills while advancing through the seaside environments. Basic moves include the repertoire introduced in Super Mario 64 as well as the added functions of the water cannon. Mario can use it to blast into the sky and fly for short periods of time before the water needs to be replenished. Dinosaur pal Yoshi can also be ridden and used to solve puzzles or to attack enemies. Other collectibles include both red and blue coins, ten of which are hidden on a level. Only by finding enough shines can Mario help save the world from the murkiness created by his dastardly double.