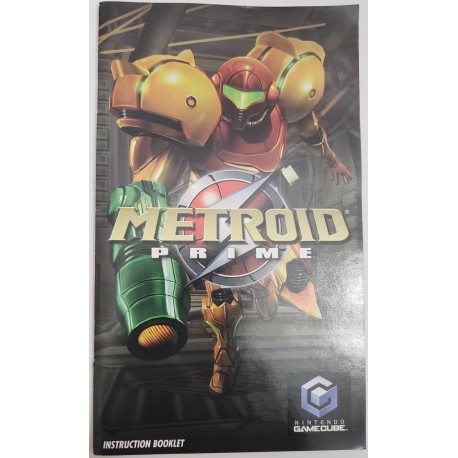 Samus Aran makes her GameCube debut in a title that finds the sci-fi series evolving from a side-scrolling game to a first-person shooter. The evil Space Pirates are up to their old tricks again, this time on a remote planet called Tallon IV, so Samus must embark on another adventure through uncharted territory. While the perspective has changed from 2D to 3D, Metroid Prime still features many of the same elements found in the previous three games on the NES and Super NES.

Samus can outfit her space suit with new weapon upgrades found along the journey, including old favorites such as the Wave Beam and Freeze Beam, allowing her to more effectively battle creatures as well as uncover new areas. Gameplay still emphasizes exploration over non-stop action, but there are still confrontations with boss characters spanning multiple screens in height and puzzles to solve using the right combination of equipment.

Samus' visor can also be upgraded in the same manner as her weapons, and players will need to effectively use the visor's thermal, combat, X-ray, and scanning abilities in order to advance through the game. Once activated, the thermal display can be used to isolate weak points on an enemy or detect them hiding under the cover of darkness. Samus can also use her morph ball ability, which automatically switches the perspective behind the hero as she rolls along hallways and tunnels to escape danger or to break through barriers.

The technology offered by the GameCube allowed developer Retro Studios to create a world with detail not present in earlier versions of the series. Each environment offers effects such as billowing gasses, electrical interference, sparks, explosions, and real-time weather designed to make the planet come alive with activity. As a bonus, Metroid Prime supports the GameCube -- Game Boy Advance Cable for connection with Metroid Fusion, allowing players to activate secrets intended to enhance both titles.