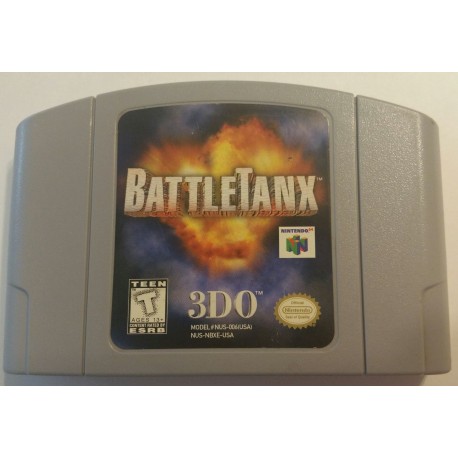 The 3DO Company's first Nintendo 64 release is a 3D tank shooter not unlike the arcade hit Tokyo Wars. The title takes place in the future after a plague wipes out 90% of the world's female population. Gangs have now formed to find the extremely precious female survivors and crown them as their queens (referred to as QueenLords). Yet these aren't your ordinary street gangs; each member drives one of three types of armored vehicles: M1A1 Abrams, Goliath, or MotoTank (similar to a motorcycle).

BattleTanx is played from either a perspective behind your tank or a first-person viewpoint looking outside the hatch. As you drive through war-torn cities such as New York, San Francisco, Chicago and Las Vegas (including Area 51), you'll notice authentic locales such as San Francisco's Fisherman's Wharf or New York's Times Square. The buildings aren't there for show, so go ahead and lay waste to whatever strikes your fancy!

BattleTanx offers fully-interactive environments, allowing players to destroy structures, cars, roadside locations and other city details to reveal secret paths or power-ups. The five game modes offered include Campaign, Annihilation, BattleLord, Family Mode, and Death Match. Campaign has you playing the role of Griffin Spade as he journeys across seventeen levels (divided into campaigns) to defeat any gang members standing in his way. Spade is searching for the whereabouts of Madison, his girlfriend, who is rumored to be somewhere in San Francisco.

In between campaigns are bonus stages, allowing you to climb inside a Goliath tank to eliminate as many waves of enemies as you can before dying. At the end of each bonus round, you'll receive a ranking and score relative to your performance. The rest of the game modes involve various forms of multiplayer battles, from Capture the Flag variants to standard elimination-style formats, each supporting up to four players as well as the option of having computer-controlled teams.