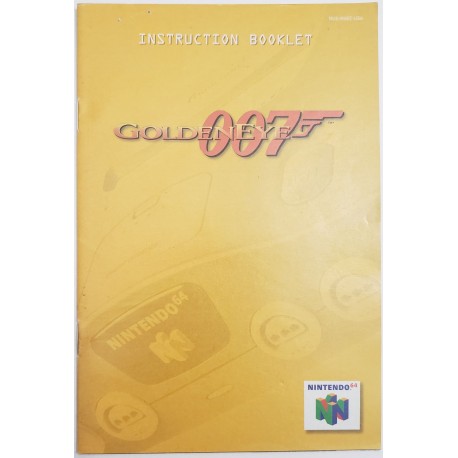 The top-secret electromagnetic satellite known as GoldenEye has fallen into enemy hands. It is believed the Janus Syndicate, an international terrorist organization, has stolen the key to the device in an attempt to render the world powerless. Your mission is to prevent the satellite from being activated. Rare's third Nintendo 64 game is a first-person shooter based on 1995's GoldenEye, the film marking Pierce Brosnan's debut as spy James Bond. The action spans 18 missions, each featuring multiple objectives, from powering-down a communications dish to disarming bombs.

Nineteen weapons range from silenced pistols and sniper rifles to proximity mines and throwing knives. To help you complete your objectives, Q has supplied your character with an array of gadgets. These include a covert modem, watch laser, microcamera, bomb defuser, door decoder, key analyzer, watch magnet, and plastique. After fulfilling your duties for Her Majesty's Secret Service, the single-player game is not over. Another difficulty level becomes available, offering new objectives to fulfill on top of previous ones. Enemy soldiers will also become harder to defeat.

You can also challenge up to three friends in the split-screen multiplayer mode. Eight scenarios, named after Bond films, offer varied styles of play, from standard deathmatches to team battles. In "You Only Live Twice," each player is given two lives to eliminate the opposition. "The Living Daylights" has you trying to hold a flag for as long as possible. "The Man With the Golden Gun" involves searching for the pistol that kills with one bullet, while "Licensed to Kill" makes every shot fatal. Adjustable options include time or point limits, arena location, weapons, and health levels.