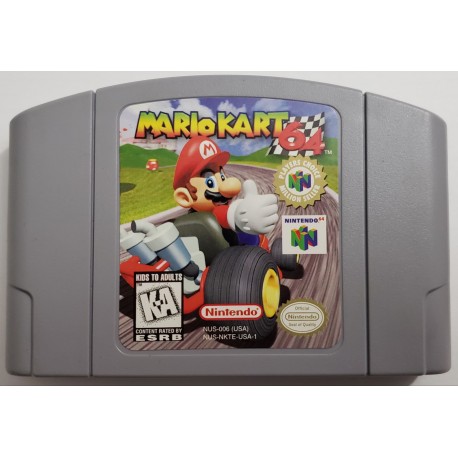 Mario Kart 64 is the 64-bit sequel to one of the best-selling games of the 16-bit era. Mario and his peers race against each other around lap-based tracks, using special items to their advantage. Items of mischief with roots in the Nintendo universe include banana peels, Koopa Troopa shells, ghosts, invincibility stars and more.

Mario Kart 64 also features the same gameplay modes as the original. Mario GP, which is for one or two players, pits your character in a series of races against the rest of the computer-controlled field. The VS mode is for two to four players, with no computer competition. Little "kart bombs" populate the track to make things even more interesting. Battle is the famous mode in which two to four players chase each other around a closed arena.

A Time Trial mode also exists for one player. For the sequel, Nintendo implemented a feature that enables ghost riders of your best races to be saved. Additionally, the go-karts are available in three engine sizes: 50cc, 100cc and 150cc. The engine size affects the speed of the game.

Peripheral support is available with the Controller Pak and Rumble Pak. The game does contain a built-in EEPROM chip to save your options and your best times, but an entire Controller Pak is required to save two ghost riders from the Time Trial mode.