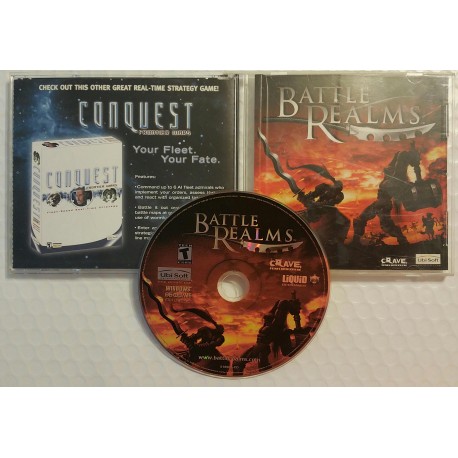 The first in a series of games developed by Liquid Entertainment and published by Crave Entertainment, the real-time strategy game Battle Realms is set in a story-driven fantasy world where samurai roam, surrounded by werewolves, ninjas, and geisha warriors. Battle Realms offers a deep and complex story, intensely detailed animé-inspired art, a living resource system, ever-changing strategies, and imaginative units, along with a unique 3D engine. The story of honor and heroism combines with clear goals and detailed character development throughout.

Guide the fate of Kenji, heir to the fallen Serpent Empire, who, having returned to his homeland after a seven-year exile, must now make a choice whether to subjugate or liberate his feuding land. Standing against him are the wild, untamed Wolf Clan and the malignant Lotus Clan in a world that is visually alive -- a place where peasants go about their daily tasks, and time marches on around you regardless of your actions. A wise sensei smokes his pipe outside the dojo while warriors train inside, birds nestle and fly among the trees and just down the road, a geisha bathes in a hot spring outside her home. In Battle Realms ninjas vanish in clouds of smoke, monks leap to impossible heights, and Zen archers can hit sparrows from across the battlefield while blindfolded.

Battle Realms is also set in a world that features a "living resource system," so how you manage your resources has a direct impact on your remaining tactical decisions throughout the game. If you use all of your peasants to grow rice, the town economy will boom and more options for troop armament and technological advancement will open. At the same time, the number of troops diminishes, because the peasants are busy farming and not training to become warriors. You will need to plan your strategy carefully to succeed.

Battle Realms' combat system is distinguished by its combat engagement AI because units intelligently react to terrain, opponent ability, and distance in combat situations. If a mounted samurai is on a hilltop firing down upon troops in the distance, the unit will know to use its secondary weapon, the Katana (a hand-to-hand weapon) when the opposing troops come into close range. In addition, if the opponent is using muskets or other ranged weapons, the unit will know to take cover to avoid bullets.