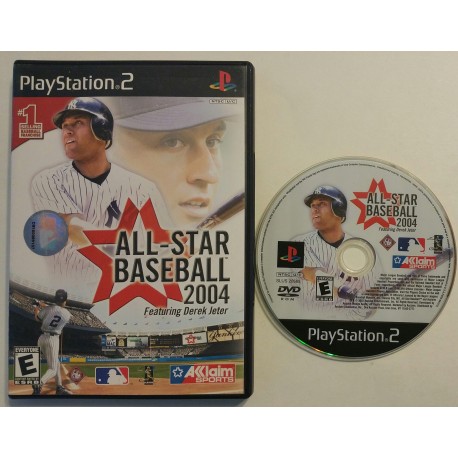 Acclaim's flagship baseball series continues with the release of All-Star Baseball 2004, once again endorsed by New York Yankees shortstop Derek Jeter. Leading the list of new features is online support, a first for the series, as well as a special nod to the past with Negro League players and new legends teams starring the greats from yesteryear. Players can take the mound with Satchel Paige, swing the stick with Babe Ruth, and swipe a bag or two with Ty Cobb, among others. The game also features a Scenario mode, offering players a chance to overcome 21 specific situations introduced by Derek Jeter with actual MLB video footage.

Jeter continues his involvement by narrating facts and tidbits on each stadium during optional panoramic tours, as well as teaching players the ins and outs of the game in Rookie Mode. Other baseball stars can be viewed in the Multimedia Section, where fans can watch video clips of their favorite athletes doing what they do best on the field and at the plate. These new features support what players have come to expect from the series, including the 20-year Franchise, All-Star Game, Home Run Derby, Trivia Game, Season, and Batting Practice modes of play. A cursor-based interface once again is used for hitting and pitching as players attempt to string together enough wins to make it to the World Series.

Also new is a Pick-Up Game, which lets users play ball on one of four fantasy fields, including a sandlot, schoolyard, cornfield, and city lot. To help simplify some of the complexities of running an organization, the game lists various rules and clarifications in a notebook-style interface. Players "flip" through spiral bound pages covering such in-game elements as budget breakdowns, waiver claims, amateur drafts, salary arbitration, free agent negotiations, and the postseason format. Of similar design is the prospect book, where players can see at a glance the top high school, minor league, and positional prospects from each team's farm system. Another key addition to the series is the ability to save a game in progress at any time during play -- from the opening pitch in the first inning to the final at-bat.