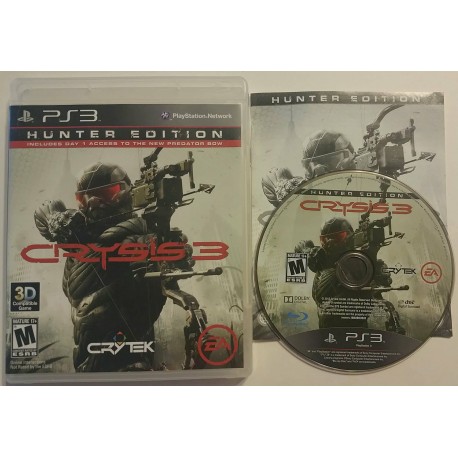 Crytek's hardware-melting shooter returns as gamers once again don the high-tech nanosuit of seasoned soldier Prophet to battle aliens and agents of the corrupt Cell Corporation in Crysis 3. The action returns to New York City, but things have changed drastically in the two decades since the events of Crysis 2. The once bustling metropolis has been encased by a nanodome, slicing the Big Apple into different zones known as the Seven Wonders, and turning once popular attractions like 5th Avenue, Midtown, and Wall Street into rain forests, grassy fields, and desolate canyons.

Combat in Crysis 3 remains varied, with players using their nanosuit's special abilities to assess any potential danger, blend into surroundings, leap high into the air, sprint away from foes, perform stealth kills, or engage in melee combat. The suit can be upgraded and enhanced in a variety of ways as gamers make their way through the single-player campaign, with each of the seven zones offering new challenges and demanding different tactics. Players can also take down foes with a variety of advanced weaponry, including the stealthy Predator bow, the 500-round-per-second Typhoon, and even alien armaments.

Multiplayer remains a big part of Crysis 3, with up to 12 PS3 gamers competing or teaming up to battle on a dozen open maps. There are eight distinct modes, including the King-of-the-Hill-like Crash Site mode, and the new Hunter mode, in which two permanently cloaked hunters attempt to kill the other ten participants before they can escape the map. Players can customize their weapons and nanosuit upgrades, and the New York Feed lets gamers see what their friends have accomplished and offers custom, skill-based achievements.

This Hunter Edition comes with the full game and multiplayer bonuses that include instant level 5 XP, the Predator bow, the Recon arrow, the Hunter Nanosuit Module, and three unique dogtags.