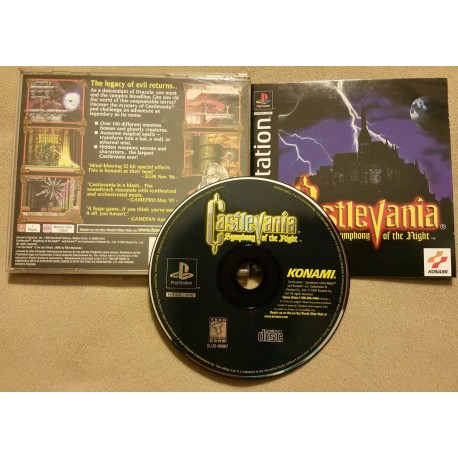 As Richter Belmont journeyed to Castlevania, he had one thing on his mind: destroy Dracula. His family had been attempting to do this for decades but always wound up failing -- he'd be brought back to life by a priest named Shaft. Richter approached his nemesis and destroyed him thinking he had finally done what others before him had failed to do.

Then he vanished without a trace leaving Maria Renard all alone and worried. She set off to find her true love -- the night Castlevania was to reappear. Unbeknownst to her, an offspring of the Dracula family was doing the same thing, though he had other plans. Alucard knew that his father wasn't dead and vowed to put an end to Dracula once and for all. Because of what he is (a vampire), he damned his father for bringing him into the world and making other people suffer; it was time to put an end to it all.

You assume the role of Alucard in Castlevania: Symphony of the Night, an updated 32-bit version of the old 2D side-scrolling classic Castlevania. While it is still a 2D side-scroller, it adds a wealth of new gameplay options and a feeling of depth and role-playing to the mix.

As you progress throughout the castle, Alucard will gain experience for killing enemies. Experience is then transferred into level-ups which gives your character more magic and hit points. Unlike other Castlevania games, your character can pull of special maneuvers, such as Summon Spirit, by executing a button combination on your controller. When one is successfully cast, it will drain your magic points like a real role-playing game.

You will also come across various items, weapons and spheres throughout your journey. Items are stored in an inventory and consist of health, food and keys for locked doors. You can also equip armor and weapons from the inventory screen. Swords are Alucard's main way of attack, though there are a variety of whips and morning stars to be found.

At times, you will find special weapons that are used by collecting hearts. There is a bottle of holy water that can be thrown at enemies, knives, a bibuti (full screen attack), a clock that freezes time, a throwing axe and more. Like your spells, they each require a certain amount of hearts (which can be collected by destroying candles and pottery) to use. Some only effect certain enemies while others have a global effect.

Alucard can also transform into different things, each of which is required to solve various puzzles. Among his normal vampire self, he can turn into a bat, a wolf, and a shade of mist. To do this, you will first need to find their respective relics and then use them (i.e. the Soul of Bat). Additionally, there are other relics that allow your character to jump higher, uncover items upon the destruction of candles and attack using his shape-shifting beings.

Finally, there are a few familiars to be found within Castlevania: Symphony of the Night. A familiar is something that can help you -- a summoned spirit. For example, there is a fairy that constantly heals Alucard and a flying demon that hits out of reach switches. Each one is essential to explore and further your adventure in Castlevania.