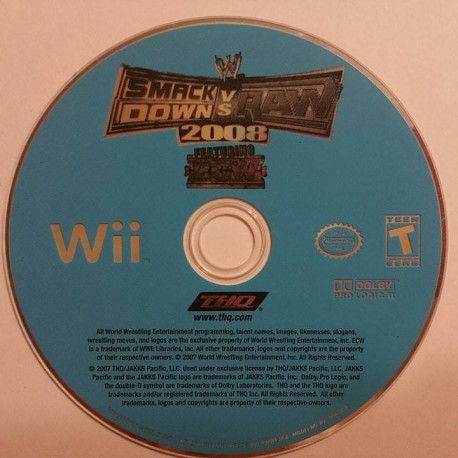 Wrestling fanatics can get their kicks (not to mention their legdrops, chokeslams, and pile drivers) in WWE Smackdown vs. Raw 2008 for the Wii. Specially designed for the Wii's unique controls, WWE Smackdown vs. Raw 2008 features fast-paced gameplay that lets users act out taunts, strikes, slams, and finishing moves with their Wii Remote and Nunchuk. Players will be able to exercise more control over their favorite wrestlers thanks to the new Struggle Submission System that lets the control stick dictate how much pressure to apply on opponents.

Gamers can pick from a roster of more than 30 WWE wrestlers and divas and live the life of a wrestling superstar in the Main Event mode. Players can also head into matches with half-a-dozen wrestling legends like Roddy Piper, Mick Foley, and The Rock, or do battle with a handful of Extreme Championship Wrestling (ECW) personalities. Wrestling fans can choose to climb the career ladder in single-player action, or grab up to three friends for tag-team, battle royal chaos.