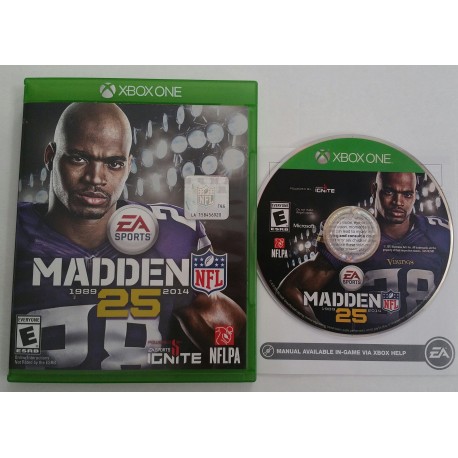 The biggest name in video game football celebrates its Xbox One debut by emphasizing the creativity and athleticism of ball-carriers in Madden NFL 25. Running backs, athletic quarterbacks, receivers, and defensive backs can now pull off more than 30 moves when they have the ball in their hands, and gamers can use the precision modifier to string together speed bursts, stutter steps, jukes, spins, and hurdles. Power moves like stiff arms and trucks have also been improved thanks to the Force Impact system, which was designed to get more out of the Infinity game engine.

The Connected Franchise feature continues the series' melding of online and career modes, and in Madden NFL 25 this is highlighted by the Owner mode. Players can create an owner or take on the role of a real-life owner and run every aspect of their franchise, from off-the-field matters like stadium enhancements, relocation, and pricing, to on-field issues like hiring coaches and front-office personnel, drafting, and making post-game statements to the media. The Connected Careers mode returns with a system designed to let gamers earn more XP and an expanded roster of playable legends, including Randall Cunningham, and both the player and coach versions of Mike Ditka.

As always, players can take on the role of an NFL rookie and guide him through his entire career, play quick games with a local friend, or head online for multiplayer action, and the user interface for the Connected Franchise mode was completely re-designed to be more easily navigable. Other features include full 32-team control, online roster- and settings-sharing, and the Madden Seasons option for the Madden Ultimate Team card-collecting mode.