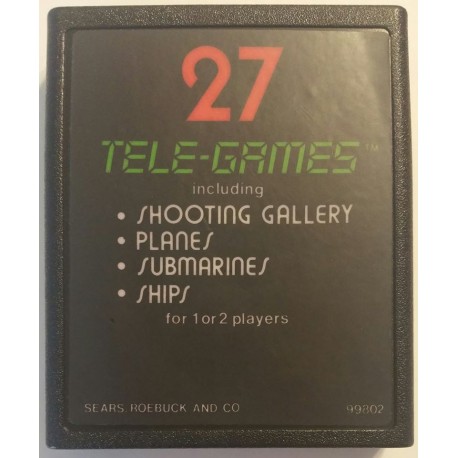 Target Fun contains six types of shooting games: anti-aircraft, torpedo, shooting gallery, missile, bomber and missile vs. bomber. Within each of these games are various selectable options, which add up to the "27 game variations" advertised in the manual.

- The shooting gallery games (13-15) simulate a carnival atmosphere where you aim at rabbits, ducks and clowns.

- In the missile games (16-18), you control a moving boat whose mission is to shoot down small jets, large jets, helicopters and 747s.

- The bomber games (19-21) are similar to the missile games, except that the roles are reversed: you are the pilot of a plane trying to bomb PT boats, aircraft carriers, pirate ships and freighters.

All games last for two minutes and 16 seconds or when a player reaches 99 points. Target Fun can be played alone or with another player, depending on the game and option selected.

Target Fun was one of the first games released for the Atari 2600 and is identical to Air-Sea Battle, released by Atari, with the exception of the game's manual, which contains different artwork and uses the term "polaris" in place of "missile."