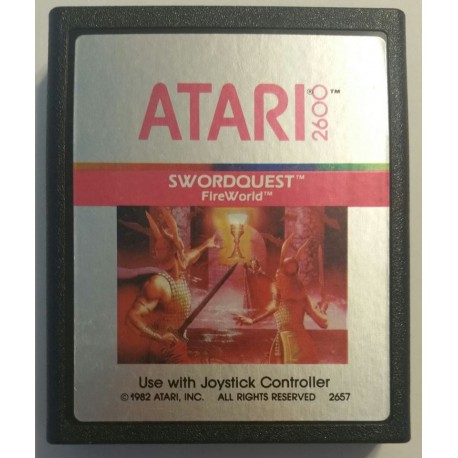 The second game in a proposed four-game series (Swordquest: AirWorld was never released), Swordquest: FireWorld is phase two of your search for the Sword of Ultimate Sorcery. You portray a mighty warrior who must use his skill, courage and detective and exploratory skills to solve the puzzle of FireWorld. Based on the Tree of Life, FireWorld consists of ten interconnected rooms, some of which contain treasure.

There are 16 objects randomly located throughout the rooms, but you can only carry six at a time. An inventory of the magical objects is as follows: oil lamp, water, rope, Talisman of Passage, amulet, ring, chalice, leather armor, cloak of invisibility, warrior's sword, shoes of stealth, grappling hook, dagger, short sword, shield and food. The most important item is the chalice, which contains water for cooling and enables you to enter a secret room at the center of the Tree of Life.

When you leave the right object in the appropriate room, you will receive a clue display, with each clue referring back to a comic book that is included in the game package. Interpreting the clues requires the use of a trial and error type of gameplay.

Prior to entering the ten treasure chest rooms in FireWorld, you must first perform an act of bravery and skill, such as dodging flaming firebirds, catching and placing flying fire goblins in a box, shooting down fire-breathing dragons, guiding flaming hot knives into a pit, and passing through a deadly pit of venomous snakes. By completing these action sequences you will gain wisdom, mercy, power, understanding and, most importantly, valuable prizes.