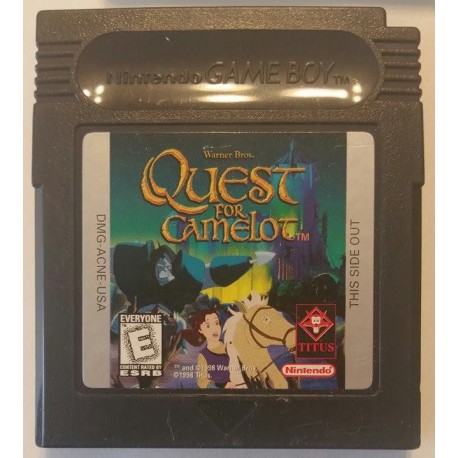 King Arthur's mighty sword Excalibur has fallen into the hands of the evil Sir Ruber, who has decided to take the magical blade and use it to claim what he believes is rightfully his: Camelot. Since Arthur cannot embark on an adventure during these difficult times, he entrusts a young girl named Kayley to save his beloved kingdom. Kayley must explore nine different locales and over 60 areas to find the legendary Excalibur and put an end to Sir Ruber's nefarious plans.

Based on Warner Bros.' 1998 animated movie, Quest for Camelot is an action RPG viewed from an overhead perspective. Gameplay involves fighting enemies, solving puzzles, disabling traps, and conversing with friendly characters. The game begins with Kayley finding a sword to use against the vile creatures populating the world. The combat system involves performing moves such as spin attacks and lunges to fight the minions of evil.

The quest will take players into caves, across forests, up mountains, and through many villages. Along the way, Kayley can receive such helpful items as a compass, slingshot, grappling hook, and even a snorkel. She'll also acquire a horse to access previously unavailable areas. Collectibles in each area include heart containers for additional life and gems for saving progress. In addition, Quest for Camelot is compatible with the Game Boy Printer, allowing players to print key scenes from the movie.