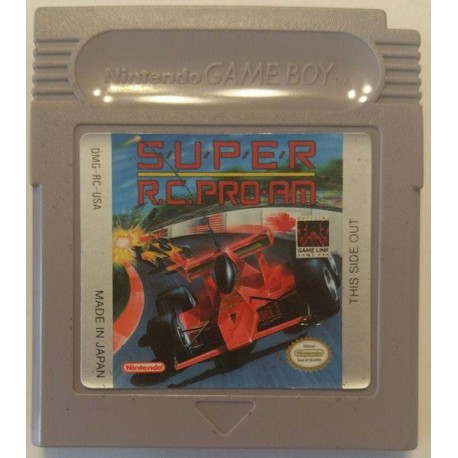 As in developer Rare's racer for the Super NES, virtual radio-controlled cars race around miniature tracks in the Game Boy's Super R.C. Pro-Am. The action is viewed from an isometric perspective, with a small, top-down map of the current track displayed along the bottom of the screen. Oil slicks and other obstacles will slow racers down, but power-ups found along the track, such as faster motors, stronger batteries, and better tires, can help turn any remote-controlled racer into a true speed machine. If players are able to steer over the letters to spell "N-I-N-T-E-N-D-O," a souped-up bonus race car is unlocked for use. The computer-controlled racers provide competition in the game's single-player modes, and with the right equipment (a link cable adapter and a game cartridge for each Game Boy player), the game supports up to four in the same real-time races.