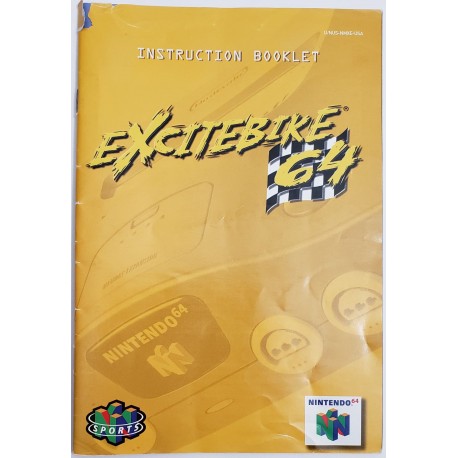 One of the most requested sequels to an NES game finally has been developed: Excitebike has received its 64-bit upgrade. Coming from Left Field Productions, developer of NBA Courtside, is Nintendo's latest entry into the sports world. Excitebike 64 takes advantage of the current Supercross/Motocross craze.

Excitebike 64 emphasizes arcade-style racing instead of simulation-type realism. In fact, the turbo system from the original game has been included. Turbo is needed for victory, but using it increases the RPMs on your bike. Use too much turbo and your bike will overheat. Although Excitebike 64 doesn't feature real tracks or real riders, it does feature real sponsors, including Bell Helmets, Thor, Scott USA, Fox Racing and others.

Up to four players can participate in a variety of play modes -- some of which must be opened by progressing further into the game. A Season mode with different cups of tracks and different levels of difficulty is available for one player. A Tutorial exists to teach you how to take bends, how to use turbo, and how to perform special tricks. A multi-player Exhibition race is available for up to four players. A Time Trial mode lets a single player race against the clock. A selection of Special Tracks, such as the original Excitebike and a multi-player Soccer mode, can be unlocked from the Season mode. A Custom Track feature, a hallmark of the original game, has been included for designing indoor courses, too.

While you can design and save your own custom tracks, Excitebike 64 does feature 20 pre-made tracks that span indoor arenas and outdoor courses. Additionally, you can choose from six male or female riders who have different abilities in the categories of landing, jumping, cornering, and turbo. Each rider can perform over a dozen tricks, having standard moves such as the Nac Nac, Heel Clicker, Saran Wrap, No Hander, etc., as well as performing their own special moves.

Expansion Pak owners can enjoy letterboxed high-resolution races by switching on the "Hi-Res" feature in the Options screen. It can't be used in the multi-player, Tutorial, or Special Tracks modes, though. Rumble Pak and Controller Pak support has been included, too. The Rumble Pak vibrates for the different surfaces and when landing. Even though an EEPROM chip is built into the cartridge to save season progress and best times, a Controller Pak is required to save ghost data from the Time Trials and to save any Custom Track