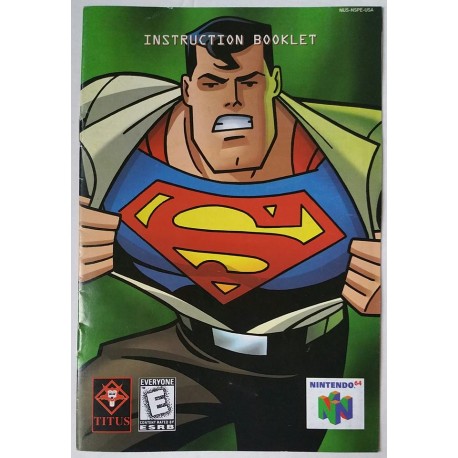 Lex Luthor and Braniac have teamed up to rid Metropolis of Superman once and for all! In order to ensnare the Man of Steel, they have created a virtual simulation of the city, where they can control or alter anything they want. To give Superman some incentive for entering this alternate world, the duo kidnapped young Jimmy Olsen and star reporter Lois Lane.

Now Superman finds himself without his powers of heat vision, freezing breath and X-ray vision. Can Superman regain his powers and save both Lois and Jimmy from the clutches of Lex Luthor and Braniac? Only you can find out! In this game based on the WB Television Network's animated series, players take the role of Superman as he struggles to complete multiple objectives before advancing to the next level.

The game begins in the virtual city of Metropolis as players fly through Luthor's maze of rings to test their agility. Once completed, a series of smaller missions will open up, ranging from saving a police car from rocket launchers to blowing three tornadoes out of the sky.

The Metropolis stage not only serves as the opening sequence for the game, but acts as an introduction to each of the game's seven indoor levels, including the Dam, LexCorp, the Warehouse, Park Place, S.T.A.R. Labs, Metro and Starship. The game also offers three difficulty settings that influence how many levels you'll play during the adventure.

In order to reach the end battle within the Starship, for example, you have to play on the "Superman" difficulty level. Besides completing certain objectives, gamers must confront various boss characters, including The Parasite, Darkseid, Metallo, Mala, Mercy Graves as well as Luthor's robotic army of Lexoskell 5000s. Of course, both Lex Luthor and Braniac will also be on hand at different points throughout the game.

Superman also offers a multi-player option allowing up to four players to compete in one of two modes: Fight and Race. Fight Mode involves choosing one of five characters (each with his or her own hovercraft) and shooting other players within an arena, while Race Mode has players flying through rings trying to pass each other.

Either mode can be played with or without a time limit, and the player who has the highest amount of energy left is considered the winner. Those who want to feel each blow can do so with an optional Rumble Pak, but players will need a Controller Pak accessory in order to resume progress.