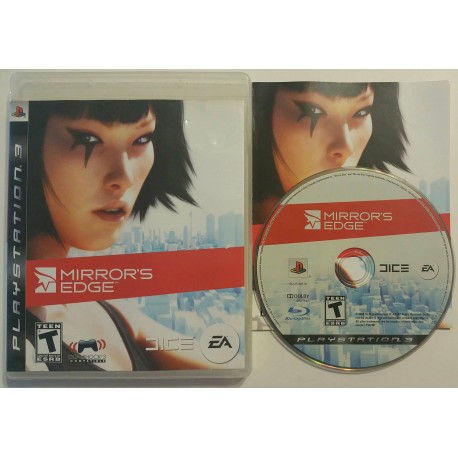 The first-ever high-def first-person platform game, Mirror's Edge is an edgy, action-driven adventure starring Faith, a skyscraper daredevil whose specialty is flips, twists, and tumbles through a 3D obstacle course of rooftops, ledges, and wires. To say that Faith takes parkour to new heights would be an understatement. It's her job to be fast and elusive, and acrobatic escapes through the highest of futuristic high-rises are all in a day's work for her.

Then again, sometimes it is better to take an opponent by surprise -- disarm him, or worse, with a quick kick or flurry of punches, before making an easy escape. The game is designed to pose Faith with multiple solutions to her puzzles and predicaments, and multiple paths to a quick demise as well. A key dynamic in this stream-of-motion play style is the "flow," which gives the player visual indications of possible routes, from rooftop to rooftop and beyond. Players devise on-the-spot strategies, to evade or attack enemies and to reach for goals that can change, literally, with every leap of Faith.

Faith works as a Runner -- a sort of secret, rogue courier. The city is controlled by an all-knowing government that truly wants to know all, and so the ability for one person to get a private package through to another person without the authorities taking a peek inside is highly valuable. It is also highly dangerous, involving death-defying routes to run, and the constant threat of being discovered and chased down. When her sister is framed for an assassination, however, the city becomes a lot more dangerous for Faith. No longer is she running for the job -- she is running for her life.