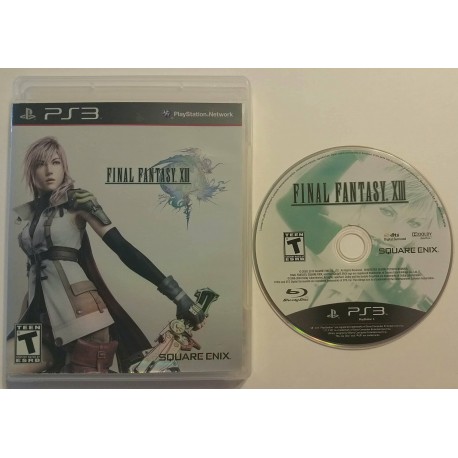 Final Fantasy XIII is a role-playing game for high-def consoles, set in an original realm that blends futuristic technology and ancient mysticism. Players follow the epic adventure of a group of gifted youngsters, informally led by an orphan girl called Lightning. The game uses an original variation on the "Active Time Battle" system, seen in earlier Final Fantasy adventures. Players queue up fighting moves for their hero to attempt, limited by the number of "Command Slot" action points they have.

Characters earn additional action points as they level up. Combat plays out in a real-time flow. As players control the key character in each battle, the computer directs the moves of other heroes. Players can influence the actions of the allies in the fight by using the "Paradigm Shift" feature to change a computer-controlled character's class type.

In the traditions of the top-selling Final Fantasy series, the game's story is told cinematically, with emotionally charged interactions between highly expressive characters, in intricately detailed, computer-generated movie sequences that run between the player-controlled action. The game begins in the mystical metropolis of Cocoon, created ages earlier by godlike titans called the fal'Cie. The city floats high above the earth, keeping its citizens sheltered and safe from the dangers of the wilderness below.

Among the populace, there are certain individuals known as I'Cie, who bear the mark of the ancient creators. This mark indicates great power, but also great danger. Those who carry it -- including the young heroes of the adventure -- are considered to be cursed. At moments of great peril, I'Cie can summon a mystical Eidolon guardian being to fight alongside them, and in certain circumstances, they can temporarily join with their summoned entities to form powerful vehicles or weapons, in the game's "Gestalt Mode."