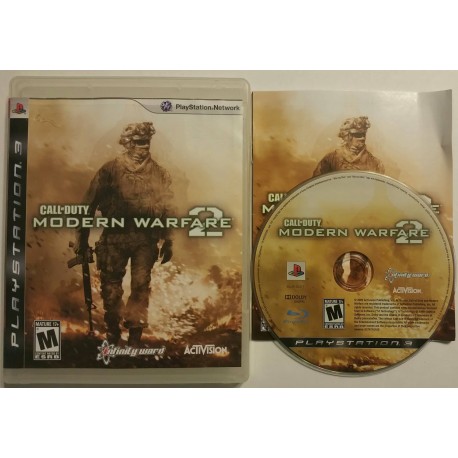 In Call of Duty: Modern Warfare 2, developer Infinity Ward aims to ratchet up the intense first-person gunplay, graphical verisimilitude, and deep multiplayer experience that won the original title wide acclaim from critics and consumers alike, while at the same time adding to the overall package with the new, fast-paced "SpecOps" mode. The single-player campaign picks up where Call of Duty 4 ended, with gamers once again descending into the shadowy world of terrorists, arms dealers, and nationless armies. Players take on the role of Sergeant Gary "Roach" Anderson, an elite member of the multinational Task Force 141 and subordinate of one of Call of Duty 4's protagonists, John "Soup" MacTavish.

Task Force 141 is on the trail of Vladimir Makarov, a maniacal disciple of Imran Zakhaev, who has used the death of his mentor as a means of expanding his own base of power. Missions find gamers working off sketchy intelligence as they battle whiteout conditions in the jagged mountains of Russia and Kazakstan, shuffle though expansive desert and cave environments in Afghanistan, and weave between City of God-like Brazilian slums, where misfires result in dead civilians and a failed mission. As was the case in Call of Duty 4, Modern Warfare 2 supplies players with the most technologically advanced weapons, vehicles, and accoutrements available, including SCAR-H rifles, snowmobiles, and heartbeat sensors.

The new "SpecialOps" mode brings gamers more than 20 fast-paced missions inspired by the frenzied mid-fuselage gunfight at the end of Call of Duty 4. Players find themselves racing snowmobiles, battling a huge number of enemies at once, or simply attempting to get in and out of a building without dying, and missions can be played solo, in local split-screen co-op, or online with a friend. Those looking for more online action can also take on the "Free-for-All," "Demolition," "Domination," "Search & Destroy," "Capture the Flag," and "Team Deathmatch" multiplayer modes.

The much-lauded RPG-like system of doling out experience points and unlockable rewards returns in Modern Warfare 2's multiplayer modes, but Infinity Ward has also included a number of new wrinkles to spice up the action. Maps are designed to be both more expansive and more vertical; weapons feature a variety of new attachments; new "Pro Perks" let players gain more stopping power, greater speed, or automatic health boosts; and gamers who manage to string together a number of kills gain access to the new "killstreaks" system, which lets them call for seven different kinds of heavy-duty support, including supply drops, helicopter gun attacks, and unmanned aerial vehicle strikes.