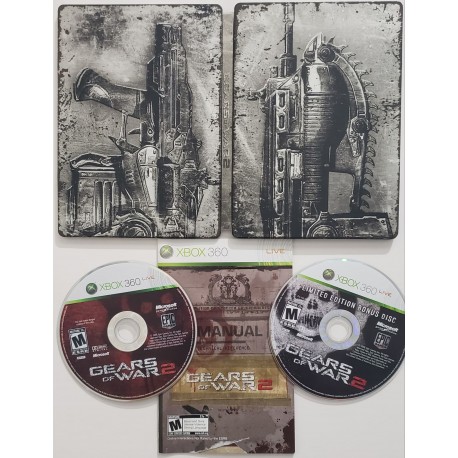 Sequel to the Xbox 360's first truly Epic hit, Gears of War 2 continues the brutally gruesome futuristic, apocalyptic wartime adventures of Marcus Fenix. Set six months after the end of the original Gears of War, the single-player campaign follows Fenix and his COG Delta Squad as they lead the way in humanity's desperate counter-offensive against the Locust, a last-ditch effort to destroy the subterranean scourge where it lives. Players embark on squad-based first-person shooter missions in a desperate assault against an enemy that has no mercy, nor should be given any. New abilities and weapons help in the fight. Portable shields make it safer to advance through open spaces, and when a proper shield is not handy, a fallen enemy can be used for portable cover. Weapons such as the "Mulcher" machine gun and the "Scorcher" flamethrower leave their mark on the destructible environments, as well as on Locust enemies.

Expanded support for co-op play allows two to play through the main campaign together, with support for easy drop-in and -out play, and the option for each teammate to use a different difficulty setting, allowing a veteran COG commando to play alongside a newcomer to the series, and both to still enjoy the right level of challenge. The game also offers a new "Horde" co-op mode, in which up to four players together struggle to fight off wave after wave of increasingly difficult Locust attacks -- battling for high scores, and perhaps even to reach the rumored, final 50th wave. In all, the sequel features eight modes of online multiplayer play, including the two-man team "Wingman" mode, a meaty twist on capture-the-flag, called "Submission," in which the "flag" is a computer-controlled character, and "Guardian," a variation of the original game's "Assassin," in which each team receives unlimited respawns until its designated Guardian is killed.