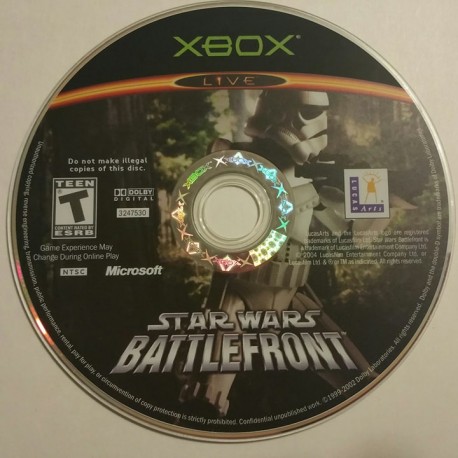 Players who log in to this corner of the Star Wars universe find live-action battle against like-minded gamers and fans from around the country. Likely inspired to some extent by Digital Illusions' successful Battlefield series, this LucasArts shooter features the same style of fast-paced, large-scale, multiplayer warfare, but is set a long time ago in a galaxy far, far away. Instead of Axis versus Allies, or the United States fighting North Vietnam, Imperial Stormtroopers, and separatist droids face off against rebel commandos and clone army soldiers in Star Wars: Battlefront.

The battlegrounds featured in the game are intended to highlight the most memorable conflicts from all six Star Wars films, and offer a dozen different environments on ten famous planets, including Hoth, Endor, Tatooine, and Kamino. In many locations, a selection of drivable vehicles can be found, such as speeder bikes, Imperial walkers, and X-Wing fighters, and these may turn the battle in favor of the soldiers who can put them to best use. The game can be played from either a first- or third-person perspective, and offers split-screen multiplayer modes for consoles without Internet connections. At least 16 players can battle together online, and three single-player modes are offered as well: "Instant Action," "Galactic Conquest," and the plot-driven "Historical Campaigns."