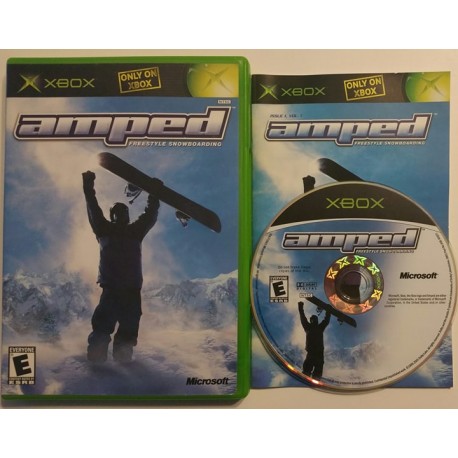 Amped: Freestyle Snowboarding provides a completely different snowboarding experience from the likes of the more arcade-oriented SSX Tricky. You begin as little more than an unknown rookie boarder, but by completing various objectives like achieving the three highest scores for a run, competing against a pro boarder, or performing tricks on parts of the courses teeming with photographers and media, you'll begin to advance through the ranks, rising in stature and popularity. Perform well in front of the media and you might even find yourself on the cover of a magazine. As with most any sport, sponsors play a vital role in its and its competitors' success, a fact reflected in Amped. Often, you'll be required to perform particular tricks for a sponsor in order to get them to notice you. Do so, and you'll be rewarded with a variety of new gear, including boards, boots, and goggles. Gamers can even save their replay data and then compete against it in a particular mode.

A mixture of fantasy and real courses, like Stratton and Snow Summit, provide the stomping ground for your burgeoning career. Grinds and "trick tweaks" can be performed with a single button press, while more complicated spins and flips require careful manipulation of the left analog stick. You'll also need to be aware of your rider's orientation at all times, because if not properly aligned your rider will bail at every possible instance. Runs are in fact not timed, allowing players the freedom to do whatever they want, whenever they want.

More than 150 songs are included in the title's soundtrack, covering almost every conceivable genre -- at least those the target audience will most likely enjoy, anyway. Added to this is the ability for players to save their own CDs to the hard drive and then include the tracks in play lists in the title. Songs you don't like can be skipped quickly and easily. A variety of modes -- such as King of the Hill, Best Trick, and High Score -- can be played by multiple players, though strictly in an individual capacity since no simultaneous play is offered.