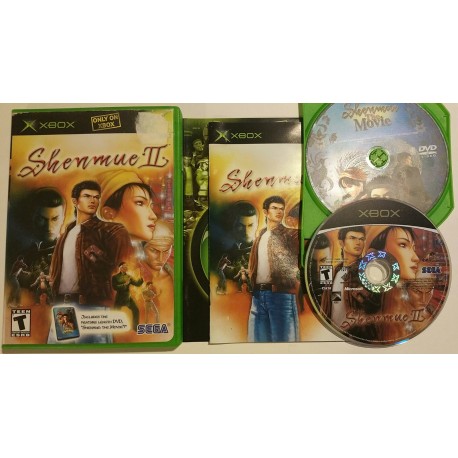 The sequel to Yu Suzuki's 70 million-dollar cinematic adventure for Dreamcast makes its long-awaited U.S. debut as an Xbox exclusive. The story begins where the original game left off: Ryo Hazuki's relentless pursuit of the man who killed his father. As Hazuki's boat lands in the port of Aberdeen, Hong Kong, he once again must rely on basic detective work to gather leads, which involves interviewing local residents, exploring his surroundings, taking an odd job or two to raise some cash, and piecing together the clues needed to track down the elusive Lan Di.

Unlike the first title, where combat represented an estimated ten percent of gameplay, Shenmue II increases the amount of fighting and frequency of Quick Time Events. Quick Time Events are scripted action sequences fueled by quickly pressing certain buttons at specific times in a manner similar to the original Dragon's Lair. Shenmue II also minimizes the waiting associated with the first game. Players are still free to explore during the day and at night, but they can also advance time to attend a meeting or enter a shop rather than wait around town.

Throughout the game's four main regions (Aberdeen, Wan Chai, Kowloon, and Guilin), players have an opportunity to earn money in a variety of ways. Players can gamble on dice games or pachinko machines, engage in fighting or arm wrestling contests, sell trinkets at a pawnshop, or perform menial tasks like moving crates or books. This money can be used to purchase maps, toys, artwork, or for services such as a night at the local inn. As in the original, players can drop coins into authentic arcade games, including Out Run, Space Harrier, After Burner II, and Hang-On.

Each area in Shenmue II is an estimated ten times larger than its predecessor's locales and features bustling crowds, changing weather, and potential threats in the form of thieves and gangs. Dynamically changing Chinese music accompanies Ryo as he moves from area to area, and each character can be spoken to as he or she communicates with animated facial expressions to help further the sense of realism. Among the areas players will visit are markets, parks, piers, wharfs, apartment complexes, gardens, warehouses, alleys, and a martial arts training ground. Progress can be saved at any time to the Xbox hard drive.